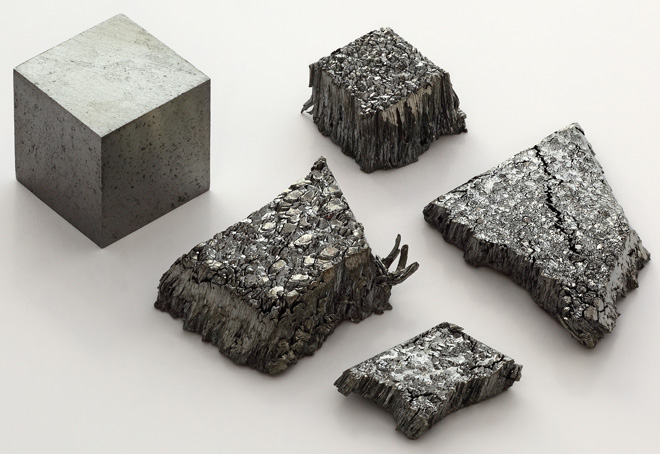 Lutetium is a silvery-white metal. It is element number 71 and has the symbol Lu. It is the last of the lanthanide series of elements, and has been classified as a lanthanide despite being in the d-block, rather than the f-block as are all the other lanthanides. [1]

Early in the 20th century, lutetium oxide was discovered independently by Carl Auer von Welsbach, Charles James, and Georges Urbain - all of whom found lutetium as an impurity in ytterbia. Ytterbia, one of the materials obtained from the mineral gadolinite, had previously been thought to consist only of ytterbium oxide. In the 19th century, theories of atomic number were incomplete and so it was not known how many lanthanides there were supposed to be. [2] [3]

Urbain named the new element lutecium, which was later changed to lutetium - although in Germany the name cassiopeium / cassiopium, chosen by Welsbach, persisted until the 1950s. [1]

Lutetium occurring naturally is composed of one stable isotope - 175 Lu - and one radioactive isotope - 176 Lu - which gives off beta particles and has a long half-life of 3.78x1010 years. [1]

Lutetium is typical of rare earth elements in that it forms salts in the +3 oxidation state. [3]

Lutetium is one of the rarest (and most expensive) of the rare earth elements and is difficult to prepare. It occurs in small amounts in minerals containing other rare earth elements, such as bastnasite, xenotime and euxenite. Today it is extracted from monazite, of which it comprises only 0.003%, by an ion exchange process. It is also one of the products created by nuclear fission. [1] [4]

Global lutetium production is around 10 tonnes per year, with the majority coming from China.

Owing to its rarity, high price and difficulty of extraction, lutetium has no large scale industrial uses. It is often held that lutetium is "one of the least useful elements" - however number of smaller-scale uses have been found and research continues.

Lutetium aluminium garnet, abbreviated as LuAG, is a transparent optical ceramic that has been proposed as a high refractive index lens material for immersion lithography. It is considered the most promising material for this use, with a refractive index of 2.14. [1] [5] Cerium-doped LuAG s exhibit scintillation and are being investigated for their ability to detect high-energy photons. [6] Europium-doped lutetium oxide (Lu2 O3 ) is another transparent ceramic being investigated for potential uses in medical, nuclear physics, oil exploration and other applications. [7]

Lutetium oxide has a number of uses. It is an important raw material for laser crystals and other laser applications. It is also used in catalysts for cracking, polymerization, alkylation and hydrogenation. [8]

Lutetium tantalate (LuTaO4 ) happens to be the densest known stable white material. This makes it ideal for use as a phosphor, however its high cost is prohibitive. Lutetium tantalate exhibits thermoluminescence, but only exhibits weak fluorescence; however incorporation of dopants of other rare earth elements in small amounts can yield bright fluorescence. Possible dopants include europium (red), samarium (red), terbium (green-yellow), praseodymium (red), thulium (blue), dysprosium (orange) or niobium (blue). [9]

Radioactive lutetium compounds are also being researched for use in cancer therapy. [11]

Lutetium Phosphide is a semiconductor which has use in high power, high frequency applications and also in laser diodes. [12]

Cerium-doped lutetium oxyorthosilicate (Ce:Lu2 SiO5 ) is a crystalline solid which has use as a semiconductor material and in photo optic applications. [13] It is grown using the czochralski technique and used as a scintillator in high energy particle physics and tomography. [14]

Lutetium orthovanadate has shown potential for use in high powered laser applications. [15]

Lutetium was used in small amounts as a dopant to gadolinium gallium garnets, used for computer bubble memory. This research was published in 1974 and bubble memory is now generally considered obsolete. [16]