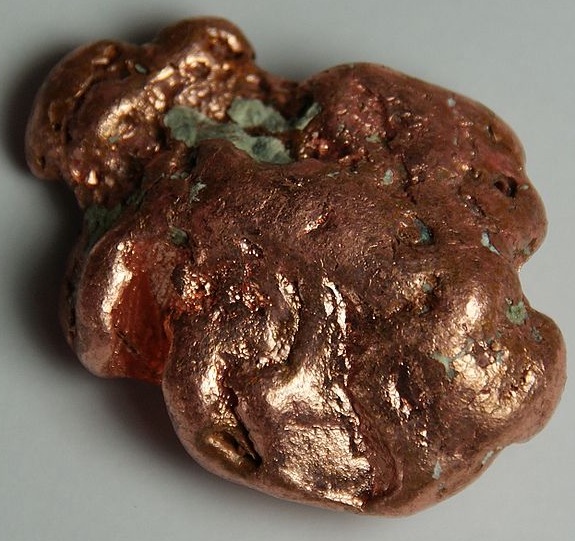 Copper is a soft, reddish metal which has been known about and used for thousands of years. It gained its name from the Roman word Cuprum - meaning "from Cyprus". Copper was used by some of the most ancient human civilizations - going back possibly as far as 9,000 B.C. [1]

Copper smelting appeared in different parts of the world in ancient times. Evidence of its production in the modern day USA dates back to between 6,000 and 3,000 B.C., while at a similar era there are signs of copper smelting in Anatolia and the Balkans [1] - lending further support to the possibility that ancient civilizations may have been connected through seafaring. In ancient times copper was used in weapons and crafts.

By Roman times copper was being used as currency - and Julius Caesar had coins which were made of a copper-zinc alloy. [1]

Copper can be found in native form - in other words as lumps of metal. It is also found in ores such as azurite, malachite, cuprite and bornite.

Despite being toxic in high concentrations, copper is an essential trace nutrient - and it's said that deficiency in copper can lead to aging effects such as grey hair, wrinkles and loss of skin elasticity. [2]

There is a huge amount of copper in the earth's crust. It's estimated that the top kilometer of the crust contains enough for 5 million years at the current rate of extraction - however, much of this copper is uneconomical to mine. There have been famous scarcities in copper in the last few years - leading to theft of copper for recycling. One of the most renowned examples of this was in Italy in the early 2000's - where electrical cables were pulled down and thrown onto fires - burning away the plastic insulation which caused acrid, toxic fumes; before being sold for scrap.

Copper is extensively recycled and it is estimated that 80% of the copper that has been mined is still in use today. [1]

Copper has the second highest electrical conductivity among the metals (after silver) and is highly ductile, meaning it can be drawn into wires. It is also much less expensive than silver and therefore used very extensively in electrical wiring, electric motors, printed circuit boards, transformers and lightning conductors. Around 65% of the copper used today is for electrical applications. [2]

Copper also has excellent thermal dissipation characteristics and is therefore used as a heatsink in computers and as a base to cookware (allowing heat to distribute more evenly). [1]

Copper is alloyed with zinc to make brass, with tin to make bronze, and with nickel. These alloys are used extensively in the manufacture of everyday products - from musical instruments and water pipes through to decorative objects.

Cupro-nickel is used for "copper coinage" such as the USA one cent coin and the English penny. [1]

Copper is used extensively to make roofing materials and the Statue of Liberty contains over 81 tonnes of copper. [1]

Copper has some interesting germicidal qualities and door knobs in hospitals are made form copper to reduce disease transfer. [1]

So despite being very common, copper is still considered a critical metal - it is in high demand for a huge number of uses, and price stability depends on supply.