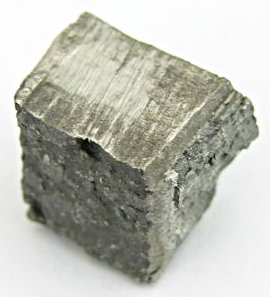 Dysprosium is a rare earth element and a brightly silver-colored metal. It has the symbol Dy and is element number 66 in the periodic table. It is very soft and can be cut with a knife. It is quite reactive, tarnishing slowly in air and burning readily. It reacts with water; more vigorously if the water is hot and hydrogen is produced. If dysprosium is on fire, the fire cannot be extinguished by water. Dysprosium's properties are significantly altered by the presence of impurities. [1]

Dysprosium was first identified by French scientist Paul Émile Lecoq de Boisbaudran in 1886. Having already achieved successes in obtaining gallium and samarium, he was knowledgeable about the periodic table and experienced in the quest for the "missing elements". He separated dysprosium oxide from a sample of holmium oxide; it took over 30 attempts, and he thus named the element after the Greek word "dysprositos" which means "hard to get at". [2] Dysprosium was not obtained in pure form until the 1950s, when it was made possible by ion exchange processes.

Dysprosium is sometimes said to be one of the most critical of the critical metals. Demand is high, with potential to grow significantly, and supply is low.

Data as to rare earth element resources seems in general to be in a state of flux with numbers varying. Reserve figures are often estimates and until mined, can not be completely certain. Also, new resources may be discovered.

China's Bayan Obo is often said to be not only the most extensive but also the richest rare earth element resource, with a grade of 6% rare earth oxides. According the to USGS 2011 report, Australia's rare-earth oxide reserves stand at 1.6 million tons, down from the previous year's estimate of 5.5 million tons. However, comments to this report suggest that Bayan Obo may have been mined to the bottom of its synsedimentary fold[4] (& comments) . Mount Weld, 35 kilometers south of Laverton, Western Australia, is now claimed to be the world's richest rare earth deposit, with an average grade of 15.4% rare earth oxides. [5] Additionally, Arafura's "Nolans Project" expects to come online by 2013 and this is estimated to supply 20,000 tonnes of rare earth oxides per year, approximately 10% of the world's requirement - although the extent of Arafura's reserves are not yet known. [4] (& comments) [6]

A number of uses have been found for dysprosium. It is one of the materials that has been used to make control rods for nuclear reactors. These fulfil their function by absorbing neutrons. [7]

Dysprosium is typical of the heavier lanthanides in that it has a high number of unpaired electrons. This gives it magnetic susceptibility and has enabled its use in data storage media such as hard disks and compact discs. [2] Dysprosium has one of the highest magnetic strengths of any element, and may be used to raise the coercivity (resistance to becoming demagnetized) of high-strength magnets such as those used for hybrid car motors. Dysprosium is used at up to 6% in substitution for neodymium. This substitution has an additional advantage of raising the corrosion resistance of the magnets - however dysprosium is scarce and such a substitution across the board would not be achievable on the scale required by the hybrid car industry. [1] Such a demand for dysprosium could indicate price gains in the future.

Dysprosium is used together with other elements such as vanadium in laser technology. [1]

Dysprosium-cadmium chalcogenides (i.e. sulphide, selenide, telluride) are infrared radiation sources and have been used in research to study chemical reactions. [1] [8]

Dysprosium is used together with terbium and iron to make the alloy Terfenol-D, which has the unusual quality of being magnetostrictive. This means it changes shape when exposed to magnetic fields - and the material is used in sonar systems and other sensors and transducers. [2] Terfenol-D is used in an interesting device called the Soundbug, a resonator that converts electrical signals into mechanical energy. The soundbug is attached to a resonant flat surface, turning it into a loudspeaker. [9]

Dysprosium compound nanofibers have been investigated for catalyst use and for strengthening of other materials. [1]

Dysprosium iodide is used together with mercury bromide and caesium iodide in high intensity medium source rare-earth lamps (MSRs) - a form of lighting used by the film industry. The lamps can be dimmed with good stability of the "color temperature". [1] [2]