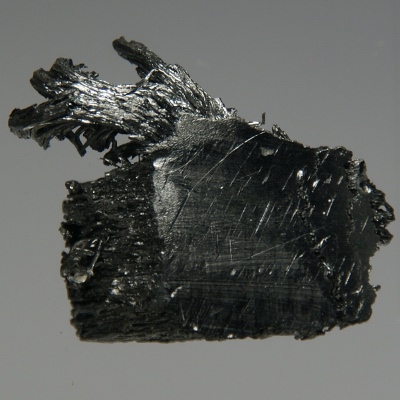 Thulium is a member of the lanthanide series of elements. It is element number 69 in the periodic table and has the symbol Tm. Thulium is a bright, silvery-colored metal that tarnishes slowly in air and burns at 150ºC. It reacts slowly with cold water and more rapidly with hot water to form thulium hydroxide. It is malleable and soft enough to be cut with a knife. [1]

Thulium was discovered by Per Theodor Cleve in 1879. Working with the material erbia (aka. erbium(III) oxide), that had been separated from gadolinite by Carl Gustav Mosander in 1843, Cleve noticed from variations in atomic weight that erbia was tainted with another substance. From this impurity he identified and named holmium oxide and thulium oxide. [2] It was not until 1911 that relatively pure thulium was able to be produced, and as the amounts produced were so small it is said that 15,000 experiments were required in order to achieve this. [1]

Naturally-occurring thulium consists of one isotope - 169 Tm - and this is stable. However 170 Tm has been created by nuclear scientists and this radioactive isotope has found some uses in medical applications. [2] A handful of other radioisotopes have also been created. The most stable of these, 171 Tm has a half life of 1.92 years. [1]

Apart from promethium, which is not found in nature, thulium is the least abundant of all the lanthanides. Upon learning this, it is surprising to note that thulium is ten times as abundant as silver and over 40 times as abundant as gold - however like other rare earth elements, thulium is typically found at low concentrations in other minerals - such as gadolinite, euxenite, xenotime, and monazite. For example, monazite sand, which is rich in rare earth elements and one of the principal sources from which they are derived, contains only 0.007% thulium. [3] Thulium is found in such small trace amounts that it is estimated that a tonne of vegetables contains only one milligram of thulium. [1]

For this reason, thulium is expensive, has few applications and has only become available in recent times. It was said of thulium in the past that there was nothing that could be done with it that could not be done more easily and less expensively with other elements. [2] is possible however that new uses may be found for thulium as the world's investigation and dependence on high technology increases.

Advances in ion exchange and solvent extraction processing have reduced costs of thulium production significantly. Around 50 tonnes of thulium oxide is produced every year - mostly from China, but also from the USA, Australia, Brazil, India and Sri Lanka. [2]

Thulium is used in certain laser technologies. Holmium-chromium-thulium triple-doped yttrium-aluminium garnet (YAG) is a laser medium which lases at a wavelength of 2097nm and has found wide use from medical to military applications. Thulium lasers are an efficient and popular choice for laser surgery procedures. [1]

Radioactive thulium isotopes have been used as small-scale radiation sources for medical and electronic applications and are considered more easy to handle than some other radiation sources: 170 Tm has a half-life of only 128 days and is a low energy source, meaning that relatively simple lead shielding is adequate, as opposed to expensive protective equipment. 170 Tm has been used in dentistry, and also in engineering, where it can assist in finding structural flaws in components. [1] [2]

Thulium has been investigated for use in high temperature superconductors. These have several possible applications including ferrites and ceramics. [1]

Thulium doped calcium sulphate is able through fluorescence to register very low levels of radiation. It has thus found use in radiation measuring equipment, such as personal radiation dosimeters. [4]

Thulium has been investigated together with other rare earth elements for its effect on high-strength aluminium alloys. [5]